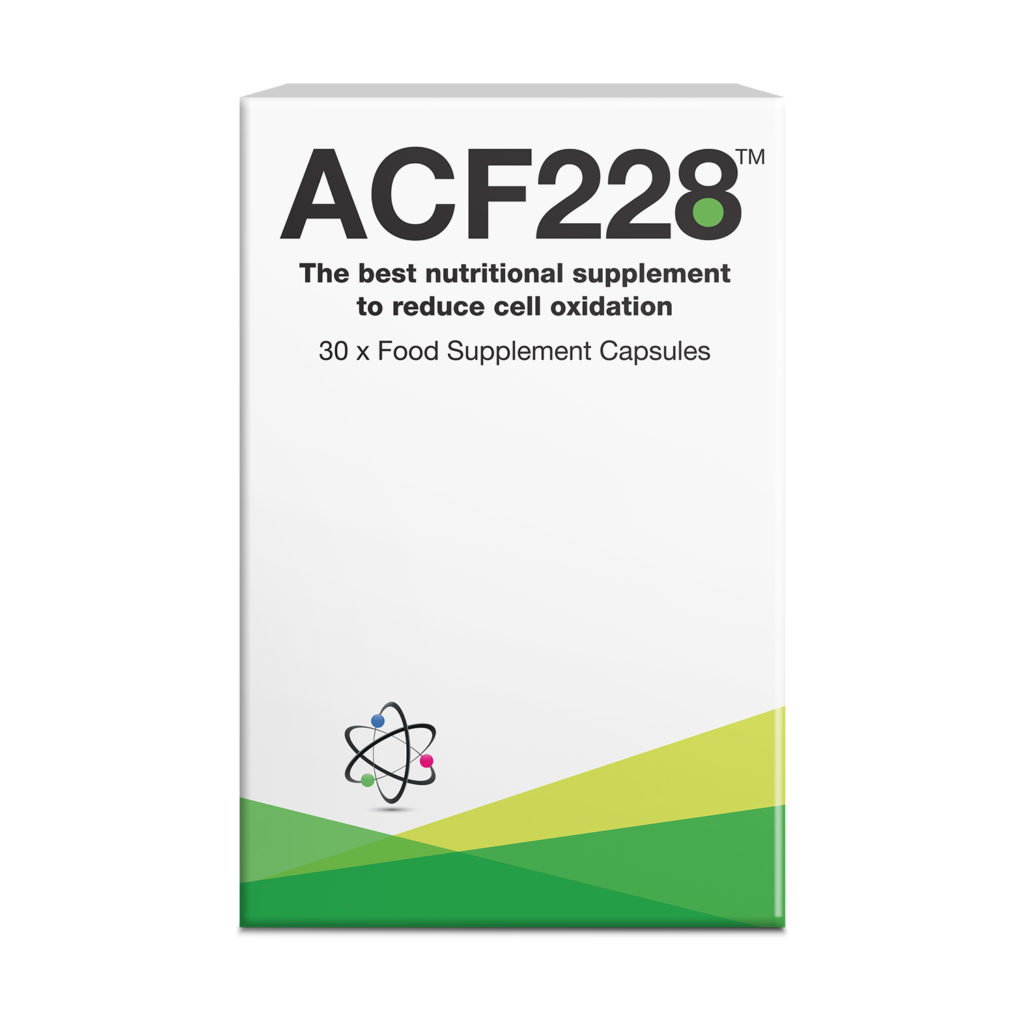 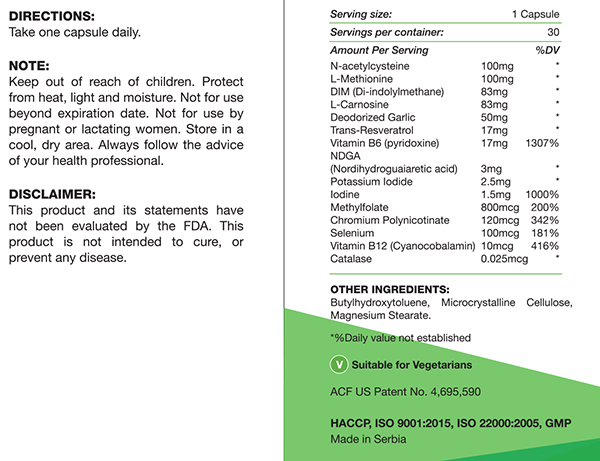 A daily prescription of ACF228 releases an operative free radical scavenger to assist and decrease the threat of cancer and fight causes that can speed up the aging process. ACF228 is a combination of ‘scavengers’, that work together to maintain the body’s natural defenses. The recipe contains Vitamins B12, B6, and folic acid- required methylation vitamins for your antiaging regime.

The ongoing conflict between free radicals and antioxidants becomes more critical as we age. Free radicals are a consequence of the natural aerobic cellular respiration which occurs within our cells’ mitochondria. A daily dose of ACF228 unleashes an effective free radical scavenger to help you reduce risk of cancer and combat factors which can hasten the aging process.

The human body consumes many pounds of oxygen each day as we breathe. These pounds are burned in our cells’ energy factories – the mitochondria.

But this process is only 94 to 96% efficient. The remaining oxygen is converted into free radicals -called ‘superoxides’. This continues every day of our lives, as more free radicals and their bi-products build-up over time.

A unique and effective formula

A vital support for these natural defences is ACF228, which was designed by a world authority in antioxidants, free radicals and peroxides, Dr. Richard Lippman.

His unique and patented ACF228 formula has been approved by the drug licensing authorities in Italy and Sweden.

ACF228 is a blend of ‘scavengers’, which work together to support your body’s natural defences.

The formula contains N-acetyl cysteine, which tackles the most common radical superoxide ‘anion’ (a negative Ion) radical through a process known as ‘quenching’.

A secondary line of defence in ACF228 is butylhydroxytoluene (BHT), which deals with the most damaging of all radicals, hydroxyl. Hydroxyl only has a nano-second half-life, so it cannot be “quenched” by ordinary antioxidant vitamins or cellular enzymes.

Selenium is another second-tier radical scavenger in the formula, renowned for helping recharge your cells’ antioxidant capabilities and binding to the toxic metal mercury.

L-Carnosine, a premier antiglycator helping counter the hardening of the eye lens and loss of skin and artery elasticity, and Dimercaptosuccinic acid (DMSA), the premier extractor of heavy metals, are also key ingredients in the ACF228 formula.

The formula contains Vitamins B6, B12, and folic acid -mandatory methylation vitamins for any serious antiaging programme – as well as Iodine and Potassium Iodide which helps lower cancer risks and improve thyroid function.

ACF228 was double-blind tested by the medical authorities in Sweden and Italy, who registered the formula as a medical product not a supplement. The clinical studies leading to these authorisations can be downloaded from the US patent office’s website (clicking patent number 4,695,590).

Dr. Lippman has shown that the “one pill / one meal” protocol reduces oxidative damage, increases mitochondrial efficiency, and slows aging at the cellular level.

Anyone following this regimen for one month, along with replacement of deficient hormones, nutrition, and moderate exercise, can expect superior blood test scores – achieving comparable values to people in their teens and twenties.

You can feel healthier and happier – and your chronological age will begin to diverge from your biological age. Dr Lippman has followed this regimen since 1979 and maintains that he is biologically at least 15 to 20 years younger than his actual age.

His unique blend of free radical and peroxide quenchers work together to strengthen your body’s natural defences. They provide a multi-pronged weapon against the aging process – and also help you to reduce the risk of cancer.

UPDATE: ACF228 is now also available in a specially designed mouth inhaler. The ACF228 Breathe-Easy can help those worried about their lung capacity and function, to help protect against oxygen deprivation and hopefully avoid the need for long term use of corticosteroids. In addition to the original ACF228 formula it also contains glutathione.

Dr. Lippman in your book Stay 40 and also in issue no. 4, 2015 Aging Matters magazine you show before and after photos of individuals whom over a 12-18 month period ‘got fit’ by aerobic exercise, but showed the dramatic aging of their faces and hair at the same time. Would you please indicate at what level aerobic  exercise can become problematic?

Heavy aerobic exercise, including heavy breathing, burns up approximately 8 times the amount of inhaled oxygen compared to oxygen consumed at rest. Unfortunately, even an athlete’s enzymatic defences can only dismutate (render harmless) 2 times the resting radical production. Consequently, without antioxidant supplementation, free radical damage occurs extensively throughout the body. This damage is visibly apparent in the hair and face of older people (as per the before-and-after photos in my article published in the Aging Matters™ magazine and in my book STAY 40). To summarize: Heavy aerobic exercise generates free radicals that burn up a body and prematurely age it. In other words, we breathe pounds of oxygen daily which converts to grams of free radicals that damage our bodies if we don’t have sufficient protection from our free radical lines of defence.

The ACF228 supplement contains catalase enzyme. I have been made to understand that catalase enzyme is digested instead of being absorbed by cells, rendering it potentially useless in supplement form. As far as I am aware, if you ingest a product it will go into your blood stream. After researching this on the website, I am unable to find anything that may suggest that the catalase enzyme is digested instead of absorbed. If you could clarify this for me, it would be much appreciated.

Dr. Richard Lippman replies: “You are correct. Catalase is not absorbed into the blood stream and neither are other large enzyme molecules such as superoxide dismutase (SOD). Catalase was included into the ACF 228 formula for the sole purpose of eliminating peroxides, especially hydrogen peroxides, from the food that we consume. Thus, catalase is only working in the GI tract and not in the bloodstream.”

I’m searching for Superoxide Dismutase – this is the product that increases SOD production as I’ve been searching for years for one that actually works. 99% of SOD products marketed do NOT work as SOD is sooo fragile.
PLEASE let me know if you have the Superoxide Dismutase that actually WORKS! One that does not destroy sublingually or in the Digestive System. Thank you for your consideration, interest, and time.

Given that this may not help you achieve your goal successfully, we then asked him what could aid in the reduction of the superoxide radical, which is the purpose of SOD. His answer is: “ACF228™ will quench free radicals and active oxygen species, but SOD is very specific for the superoxide anion radical whilst glutathione is a general, all-around clean-up molecule for miscellaneous radicals and peroxides.”

Description: As described by the Nobel Prize for Medicine nominated Dr. Richard Lippman in his new book- “Stay 40,” ACF228 is the very latest “age complete formula” to protect against free radicals and the ravages of aging.

Disclaimer: This product and its statements have not been evaluated by the FDA. This product is not intended to treat, cure or prevent any disease.

Note: Keep in cool dark conditions, out of the reach of children and consume before end of expiry date. Not for use by pregnant or lactating women.