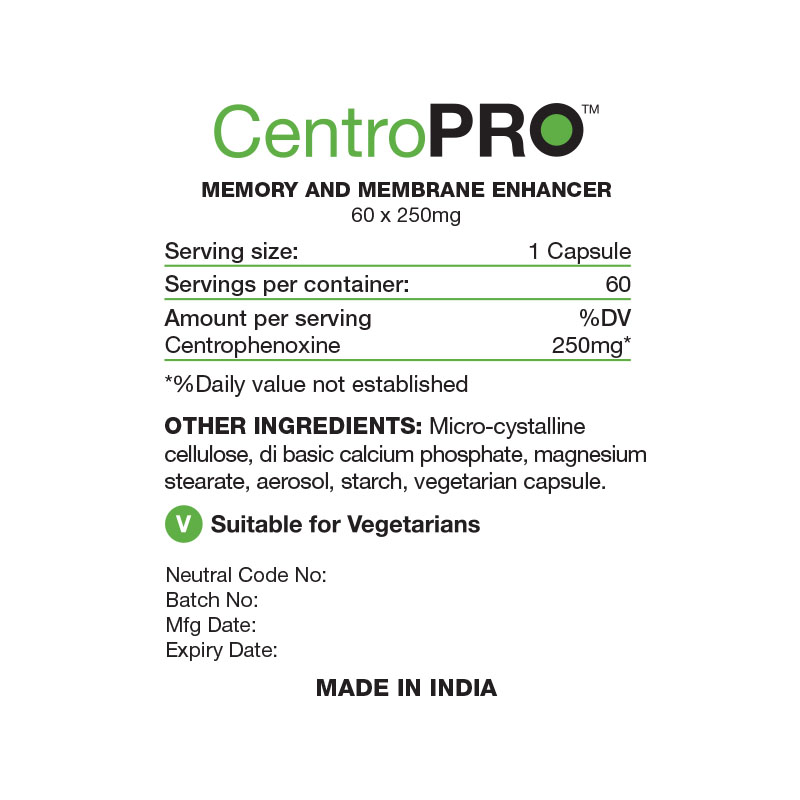 Centrophenoxine is a Nootropic or smart drug used to treat senile dementia particularly Alzheimers disease, memory problems and cognitive decline, although it also has many other therapeutic benefits. It has been proven to increase brain power in older people, improve longevity and create an overall sense of mental alertness.

Brain Power Can Be Boosted By Centrophenoxine

Centrophenoxine, also known as Lucidril or meclofenoxateor, is a combination of DMAE (dimethylaminoethanol) and PCPA (parachlorphenoxyacetic acid). Centrophenoxine is a Nootropic or smart drug used to treat senile dementia particularly Alzheimer’s disease, memory problems and cognitive decline, although it also has many other therapeutic benefits. It has been proven to increase brain power in older people, improve longevity and create an overall sense of mental alertness.

What does Centrophenoxine do?

By reducing lipofuscin levels Centrophenoxine effectively ‘cleans out’ the cells in your body and brain, improving their function and their longevity. Lipofuscin is the build-up of potassium in the brain, heart, lung and skin cells that accumulates over a lifetime. The more lipofuscin a cell accumulates the less functional it is. Both human and animal studies have shown that low lipofuscin levels correlate with healthy cellular function, while high lipofuscin levels indicate poor cellular health.

Centrophenoxine enhances neuronal glucose (the principle fuel for the brain) and oxygen uptake, while increasing carbon dioxide production. It also promotes the production of essential brain chemicals such as RNA and protein. RNA is derived from DNA in the cell nucleus, and enables neurons to form proteins, which help encode memory and repair damage to the cells of the brain.

Centrophenoxine has been widely studied and used as an antiaging agent, chiefly by the internationally renowned Professor Imre Zs Nagy, who reported that regular users of Centrophenoxine had “better mental and physical performance compared to their counterparts”.

In addition to numerous animal studies that have measured the effects of Centrophenoxine on learning abilities and memory, there have been many antiaging experiments using human subjects.

In a double blind trial of 50 dementia patients, whose average age was 76, 50% showed considerable mental and physical improvements after just two months of a 250mg twice-daily dose of Centrophenoxine.

How Much Centrophenoxine Should I take?

Healthy younger people may only need one or two 250mg tablets per day. To avoid any acetylcholine excess -which can cause headaches, neck, jaw or shoulder muscle tension -it is advisable to take occasional breaks of around one day per week.

Older people who have suffered considerable intellectual deterioration may need to take three to six 250mg tablets per day. It is strongly advised that these are consumed at breakfast and lunch to avoid insomnia.

If any side effects occur -such as insomnia, irritability, hyperexcitability, agitation or restlessness -simply stop using Centrophenoxine for a few days, and then resume on a lower dose.

Our Centrophenoxine is a powerful neuroenergizer proven to have many significant effects on the aging brain. Since Lucidril was discontinued, our Centrophenoxine has been used by Professor Nagy himself, so if you wish to use the same brand as the world’s foremost expert you need Centrophenoxine from Antiaging Systems.

“Centrophenoxine has shown many facets to improve conditions related to my membrane hypothesis of aging. For example, its ability to improve brain performance, survival time in animal experiments and to remove the cell-aging pigment called lipofuscin. It has been my antiaging supplement for more than 30-years.”

By getting rid of the build-up of lipofuscin (an accumulation of potassium) in the brain, centrophenoxine improves the efficiency, life span and health of brain cells. In doing so, the supplement can improve longevity.

A memory and membrane enhancer

Centrophenoxine (or Meclofenoxate) is a potent analogue of DMAE. It is known to improve glucose update, and remove lipofuscin deposits from the skin, brain, heart and lungs. It improves membrane conditions and fights against the “membrane hypothesis of aging.”

This product and its statements have not been evaluated by the FDA. This product is not intended to treat, cure or prevent any disease. The above information is the translation of the manufacturer’s insert. It is provided under the supplying company’s terms and conditions and should not replace the advice of your personal physician.

Keep in cool dark conditions, out of the reach of children and consume before end of expiry date. Not for use by pregnant or lactating women.