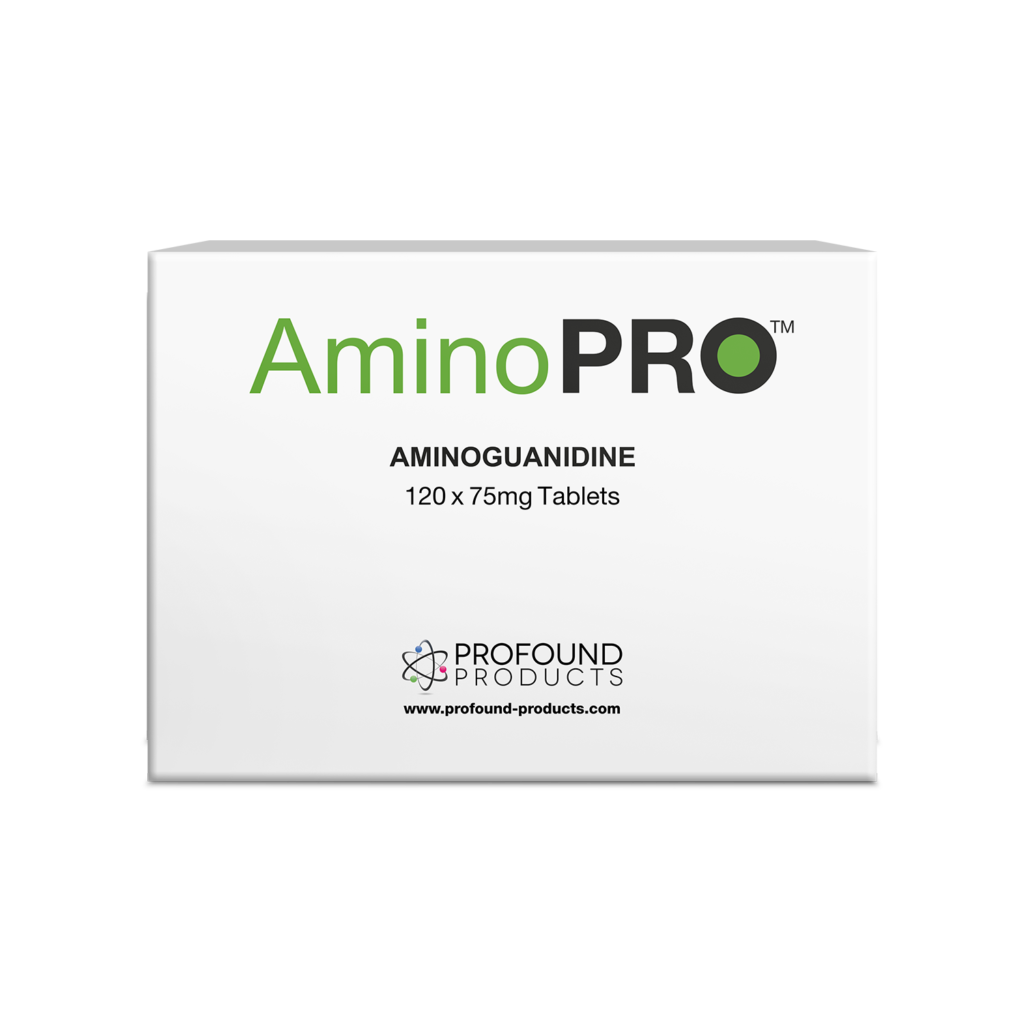 By decreasing bad cholesterol and defending the body against age-related disorders, such as atherosclerotic disease, it is probable that Aminoguanidine may have the potential to slow down the course of aging.

Turning back the clock with Aminoguanidine

Could a half eaten apple and the drug Aminoguanidine hold clues to reduce bad cholesterol (or low density lipoprotein cholesterol), and other age-related conditions such as atherosclerotic disease? Through a reaction known as ‘cross-linking’, the fruit quickly turns yellow and becomes tougher. Proteins in our bodies are thought to undergo a similar cross-linking with age. Aminoguanidine may have the potential to slow down this aging process – and protect against key age-related conditions.

Cross-linking and the aging process

Cross-linking -also referred to as glycosylation – may be responsible for many of the ailments associated with old age, including senile cataracts, some cancers, a condition where the artery walls thicken known as atherosclerotic disease, and general damage to the body’s immune system.

As we know, a weakened immune system can increase our susceptibility to infection. Looking at the cross-linking / glycosylation process -in particular the effects of glucose on the body -also reveals important clues about cancer. The effects of glucose on our DNA can increase the likelihood of some cancers developing. The glucose reacts to produce damaged DNA, which in turn can lead to the production of abnormal cells.

Aminoguanidine may have the potential to reverse this cross-linking process by actively protecting the proteins that make up our body.

The drug may also help sufferers of low density lipoprotein cholesterol -or bad cholesterol as it’s commonly known. Bad cholesterol is called bad for a reason. If high levels circulate in our blood they can build up and cause our arteries to thicken and narrow. This can lead to a condition known as atherosclerotic disease, not to mention an increased risk of heart problems and strokes.

Extensive studies by the University of Milan have demonstrated Aminoguanidine’s effectiveness in combating the impact of bad cholesterol. In tests on animals, Aminoguandine was found to restrict the ability of low density lipoprotein to bind to blood vessel walls. This is the process that causes arteries to thicken over time, increasing the risk of atherosclerotic disease and related health problems. In turn, the essential component of blood known as platelets (they ensure that blood clots to stem bleeding) are less likely to coagulate and form dangerous blood clots in the body.

Looking at the underlying process of cross-linking in relation to the aging process also reveals important clues for arterial and heart health. The aging process is associated with cardiac enlargement, arterial stiffening and atherosclerotic disease, compounded by bad cholesterol / low density lipoprotein.

Aminoguanidine has been shown to help protect against heart and associated arterial conditions linked with the aging process. One study on animals found that the drug prevented age-related cardiac enlargement, with the membrane surface area reduced by 30 per cent. At the same time, the collagen content of arterial walls was boosted by 24-30 per cent. This points to Aminoguanidine’s effectiveness in relation to heart and arterial health, and as an ally in the fight against bad cholesterol low density lipoprotein.

Studies at the University of Milan have further demonstrated Aminoguanidine’s power in treating the debilitating condition of atherosclerotic disease / arteriosclerosis. During the 1992 study, 11 patients with peripheral arterial disease -whose blood vessels were so clogged that they were unable to walk more than 500 yards -were treated with Aminoguanidine. Afterwards, their blood flow improved by an average of 30 per cent, while exercise abilities were boosted by 50 per cent.

But it is perhaps Aminoguanidine’s potential to slow down the aging process by actively protecting the proteins in our body that is most exciting. These include vital skin proteins collagen and elastin, together with eye lens, nerve and kidney proteins.

Sadly, all these key proteins deteriorate with age, particularly amongst diabetics, who typically have two to three times the number of cross-linked proteins than people without the condition.

Diabetes is often seen as a form of accelerated aging, and research into the condition lends weight to the idea that cross-linking is a key factor behind the aging process. Clinical studies involving diabetic rats found that rats given Aminoguanidine had significantly superior survival rates to those who were untreated with the drug.

Diabetic trials involving humans have also pointed to Aminoguanidine’s effectiveness in preventing a bodily process known as oxidative modification of low density lipoprotein (bad cholesterol) -which can lead to atherosclerosis and atherosclerotic disease.

This is just one of the conditions that we may face as we grow older. But understanding the role that cross-linking plays in the aging process can be a powerful ally in our quest to tackle the problems associated with old age.

Like the apple that begins to discolour and toughen through cross-linking, Aminoguanidine may provide a powerful defence against this process in our own bodies. It offers the potential to curb -or slow down – both the visible and invisible signs of aging. From a remedy for age-related toughening and yellowing of the skin, to cataract protection and arterial and heart health, Aminoguanidine is at the centre of our quest to tackle the impact of aging on our bodies.

My doctor and I are interested in the potential health benefits of aminoguanidine, our questions are: (1) have independent assays been conducted by reputable, indepdendent labs to ensure the purity and quality of aminoguanidine? (2) Would it be possible to get in touch with any other doctors who have been successfully using aminoguanidine? (3) Do you know of any new research on the use of aminoguanidine to prevent optic nerve damage in glaucoma patients?

Yes, IAS conducts independent assays on all its custom made products and all batches are also received with certificates of analysis. As regards a doctor, perhaps Marios Kyriazis, M.D. is the best person to ask as he has both research and patient experience, although we are not aware of anything specific for optic nerve damage. Dr. Kyriazis can be reached via the British Longevity Society at www.thebls.org

Our research group is interested in Aminoguanidine. We have learned from your article on the web that one derivative of Aminoguanidine (pimagedine) is at stage III and another thiazolium salt derivative is at stage II trials in USA. I would like to update my knowledge about Aminoguanidine whether the formulae are in the markets already and whether the studies which you referred in your article are published. Any printed or electronical information would be very helpful for our intended research and scientific paper about it. I thank you in advance for your courtesy and cooperation.

The current position as I understand it is that Alteon (the US company conducting the Aminoguanidine and ALT-711), have decided to withdraw from the stage II trials etc. I believe their decision was based on a belief that both the substances were not as efficacious for the treatment of diabetes as they first thought, and that the extra cost of passing FDA approval was deemed unacceptable.

However, there are of course many of other benefits of these substances as described in our article and other articles about ‘glycosylation’ at the IAS website.

The majority of the studies mentioned in the article are published and should be obtainable through any major medical database such as Medline etc.

At present, IAS is able to offer Aminoguanidine as a ‘supplement’ in many countries and it remains of benefit to those with early stage diabetes and syndrome X etc.

Can you give me any information comparing Aminoguanidine to L-Carnosine in terms of efficacy in eradicating cross linking, glycation reactions, etc.

As you may appreciate it is difficult to be precise to equate Aminoguanidine to L-Carnosine (in terms of their anti-glycation abilities), as to the best of our knowledge no direct comparison studies have been done.

Possible nausea and headache. But as human clinical trials are still relatively limited, dosages shouldn’t be exceeded unless under the supervision of a physician.

We supply a hydrochloride (HCL) based tablet. This is more expensive than a bicarbonate based version, but the HCL is more soluble, less irritating and is the type used in the clinical trials.

Our new formulation of Aminoguanidine now contains 10mg of B6 in each tablet so you no longer have to remember to supplement with this vitamin!