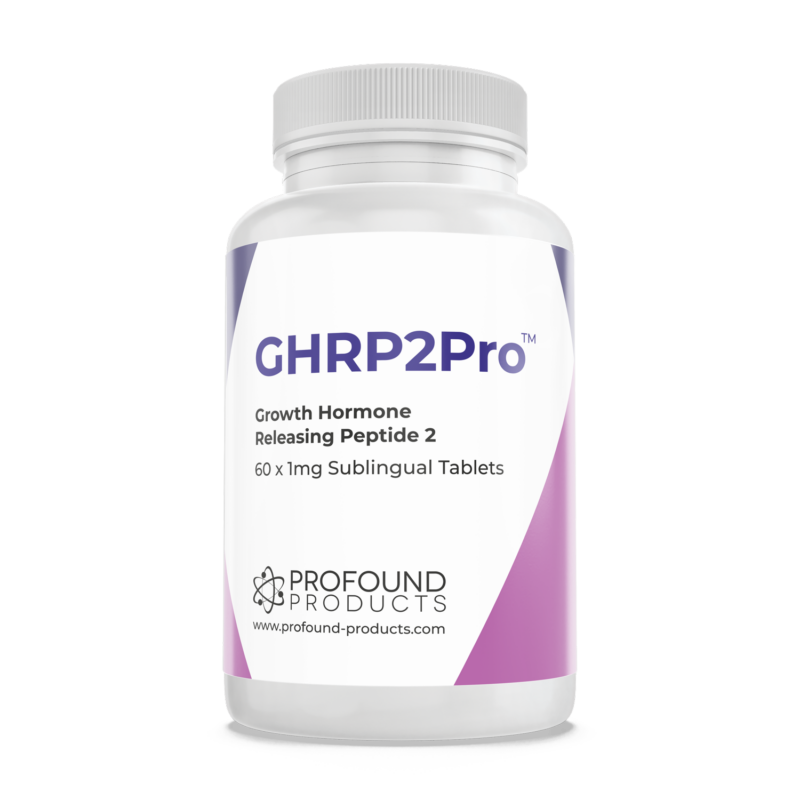 Stimulates the production of GH from the pituitary gland, but without any significant side-effects of causing the desire to eat that are typically found when taking Ghrelin.

Ghrelin is a relatively well-known hormone that can significantly influence the release of growth hormone (GH) from the pituitary gland, unfortunately Ghrelin has also been dubbed ‘the hunger hormone’ since its use can trigger hunger pangs.

However, there is now an analogue of Ghrelin called GHRP2 (growth hormone releasing peptide 2) that still stimulates the production of GH, but without any significant side-effects of causing the desire to eat.

The growth hormone releasing peptides (including sermorelin) have been advocated by research physicians such as Richard Walker, M.D., Ph.D., since they offer a number of advantages over injecting GH itself, these advantages are:

Other measures taken before-and-after included total body fat which decreased, on average, by 9.14% with visceral fat levels decreasing, on average, by 14.27% (with no significant changes in the placebo group). At the same time, muscle mass (as lean body mass) increased on average by 5.37% in the GHRP2 group; plus, forced lung capacity was increased on average by 16.61% (and again there no significant changes in the placebo group). Remember these effects were seen when GHRP2 was taken by mouth- not by injection.

At the same time, improvements were also noted to the patients waist and hips and ratios, total body composition (fat, water, bone and muscle mass), and forced lung capacity.

All these positive changes to these aging biomarkers corroborate findings from the studies that utilized GH injections. Therefore it is proof that GHRPs offer a real world alternative to GH injections.

Dr. Walker has gone on record to state that Sermorelin taken at bedtime (which enhances the release of GH into the bloodstream) and GHRP2 taken first thing AM (which increases production of GH), when combined can offer a 5-fold efficacy. Therefore these two agents (used sublingually and orally respectively) can be considered to be extremely synergistic.

Few side effects have been noted in the studies, some experience soft stools and upset stomachs. There have also been increases in the total blood platelet count, but values have remained within the normal clinical range.

The toxicity and LD50 ratios for GHRP2 also look good and therefore when used within its normal clinical dose ranges should not present any problems.

Naturally it would be prudent to monitor blood GH levels (actually measured via IGF-1), to ensure that they stay within the normal ‘youthful’ level.

GHRP2 can be taken up to 10 ml first thing in the morning. These dose levels can be advocated when the patient needs to significantly raise their GH levels to achieve results, (as achieved in the study mentioned above). However, once levels and results are confirmed, the daily maintenance dose is recommended at 4 ml daily.

*A phase III, randomized, open label, placebo controlled clinical study to evaluate the efficacy and safety of GHRP2 for the treatment of age related changes in form, function and quality of life in healthy subjects. Date on file, ProSoma FLA, 2 March, 2012.

“What is the difference between GHRP2 and GHRP6? When should I use one over the other?”

“How many milligrams are there in each 120 ml bottle?”

The Natural Aging Process, compounded by inadequate nutrition and lack of exercise, causes progressive loss of essential nutrients and hormones that are needed for optimal form and function. Loss of these factors contributes to reduced health and vitality while increasing frailty and the risk of developing diseases of aging. By consuming foods that stimulate hormone production and adopting a more active life style, the body can sustain and/or increase muscle mass, reduce fat and counter the progression of age-related illness. GHRP2 Pro contains nutrients that are known to be capable of stimulating natural hormone production but are not available in traditional diets alone.

Disclaimer: This product and its statements have not been evaluated. This product is not intended to cure, or prevent any disease.

Note: Keep out of reach of children. Protect from heat, light and moisture. Not for use by pregnant or lactating women.
Do not use beyond expiration date. Best if used within 6 months after opening.