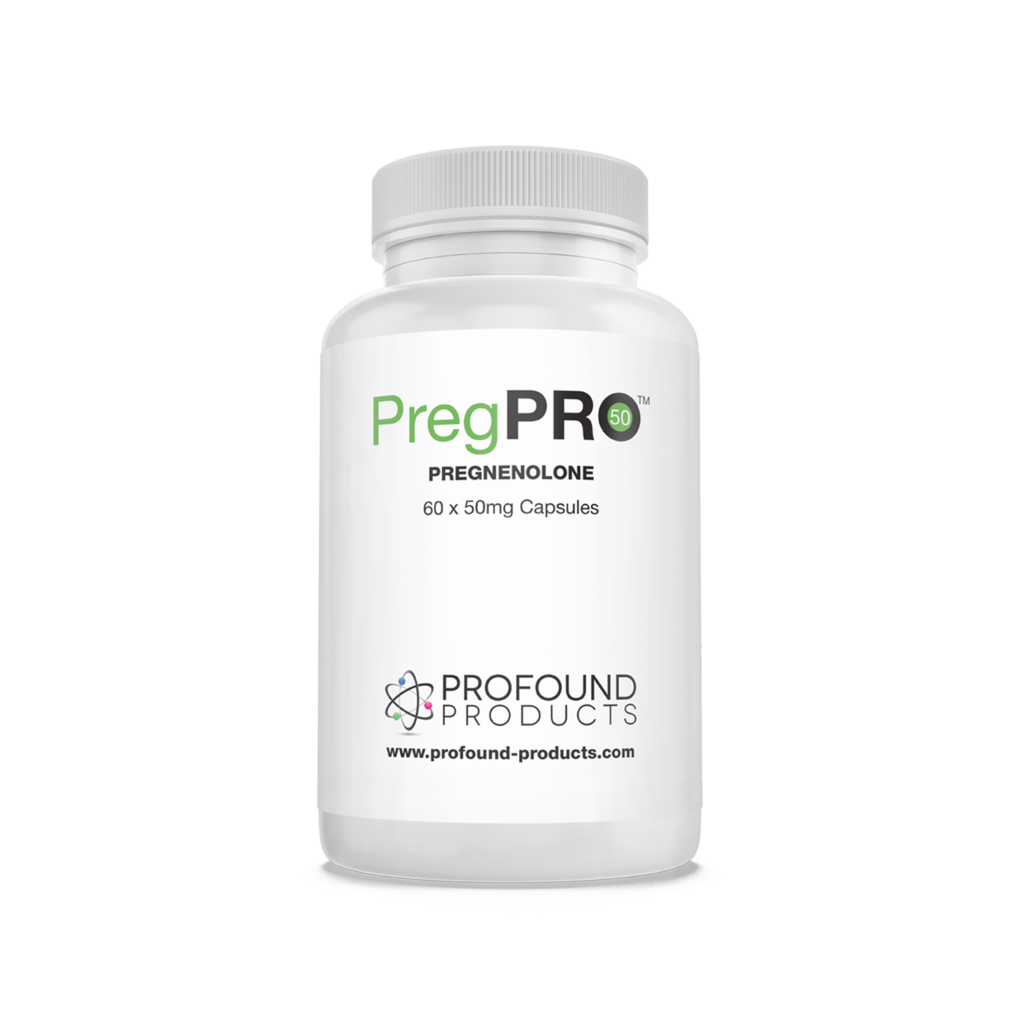 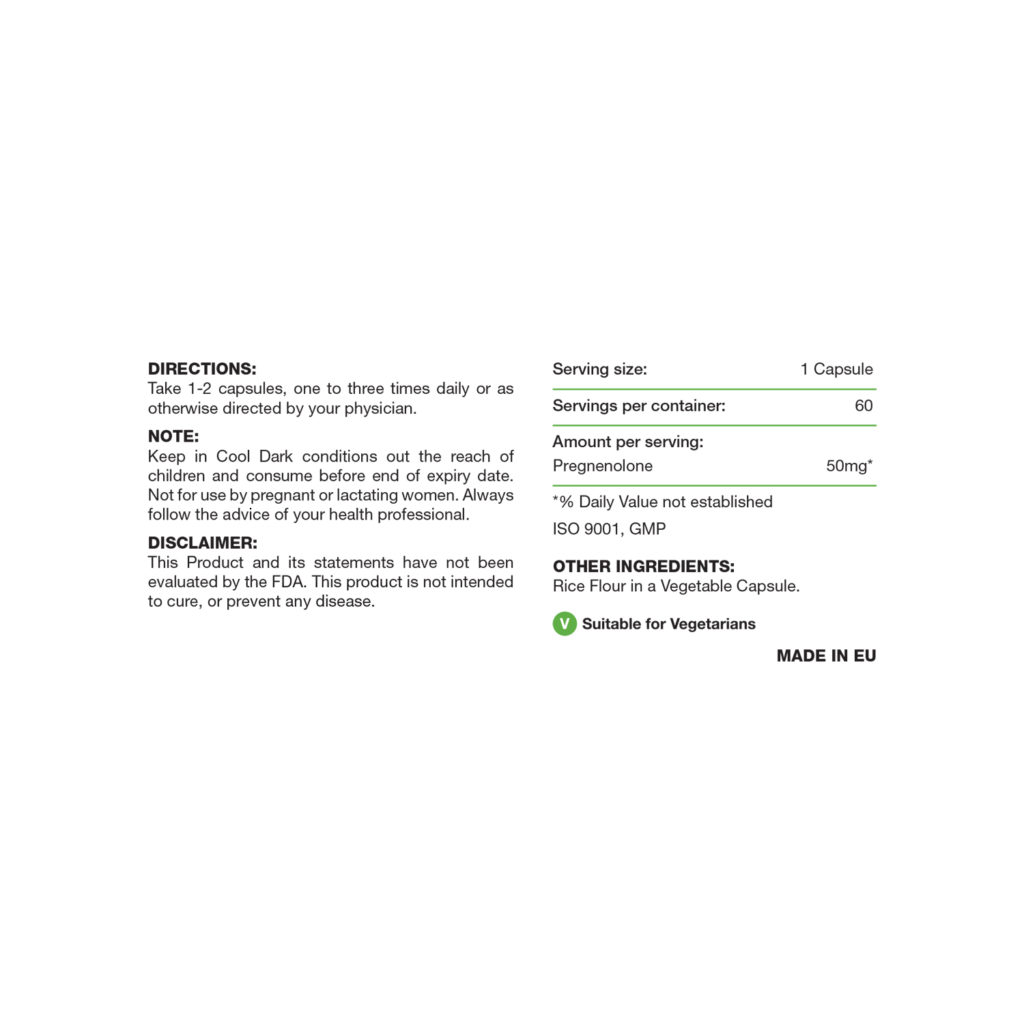 Often described as the mother of all hormones, naturally occurring pregnenolone acts to improve memory and combat depression – and has powerful anti-inflammatory arthritis pain relieving properties.

In addition to stress and depression, pregnenolone supplementation also entered the antiaging arena to address mental decline and memory loss, and act as a memory enhancer.

Often described as the mother of all hormones, naturally occurring pregnenolone acts to improve memory and combat depression – and has powerful anti-inflammatory arthritis pain relieving properties.

Pregnenolone isn’t actually a steroid hormone, but what’s known as a metabolite -the molecules forming part of the chemical chain behind human development.

Pregnenolone acts as a key building block in the body’s steroid hormone production during the cellular growth process powered by mitochondria. Mitochondria act as the power source to drive the growth of cells in the body by generating ATP -short for adenosine triphosphate -a form of chemical energy. In a typical human cell there may be thousands of mitochondria, which also contain pregnenolone.

Inextricably linked to this cellular growth process, pregnenolone forms the raw material for hormone production. This explains why it’s inadvertently called the mother of all hormones, the pregnenolone hormone and sometimes the adrenal hormone (being formed in the adrenal gland and central nervous system).

Like its counterparts estrogen, testosterone, cortisone and Progresterone, dehydroepiandrosterone is a steroid hormone that Pregnenolone helps to produce.

The benefits of pregnenolone

Research into pregnenolone benefits can be traced back to the 1940’s, when it was found to aid the productivity of factory workers, whilst helping to reduce stress. Pregnenolone for pain relief research also centered on pregnenolone’s excellent anti inflammatory properties, particularly in the treatment of arthritis.

What is pregnenolone used for today?

While pregnenolone benefits had been established and found safe to use as a pregnenolone supplement, it wasn’t until the 1990’s that pregnenolone rose to prominence again -this time as an antiaging memory enhancer and an aid to boost memory.

Research cantered on the brain hormone factor and how pregenenolone benefits mental health and wellbeing as part of the complex steroid hormone production process. The scientific community was interested in how the pregenolone metabolic process could influence mental health, stress and depression, with pregnenolone supplementation perhaps acting as an anti depression supplement.

In addition to stress and depression, pregnenolone supplementation also entered the antiaging arena to address mental decline and memory loss, and act as a memory enhancer. As optimal levels of pregnenolone are known to be important for mental health and cognitive functions, pregnenolone therapy came to be viewed as an important anti aging product, along with fellow cognitive enhancers such as Idebenone, piracetam, Hydergine and Vitamin B12.

Why consider a Pregnenolone hormone supplement?

Men and women typically have differing amounts of pregnenolone, while lifestyle, exercise, stress levels and age also play a part. By the age of 70 Pregnenolone levels in the body may have declined by up to 60 per cent -which is why older people may consider taking a pregnenolone dosage as part of a regular pregnenolone supplement.

Women embarking on the post-menopausal stage of their life may also find pregnenolone benefits them, as it offers a natural estrogen therapy and way to increase estrogen.

A pregnenolone supplement is available in tablet form and as a pregnenolone cream. As a natural supplement, Pregnenolone is safe to use and presents few side effects. However, care should be taken if you have a history of seizures due to the way that Pregnenolone reacts with the GABA receptors in the central nervous system.

I have MS, but now I have the energy to leave my wheelchair for long periods. Although I am taking a combination of products including your Idebenone and ATP I feel that its the Pregnenolone that plays a biggest role in my ability to live a near-normal day, many many thanks and keep up the good work.
B.M.L., Switzerland.

De-stress and boost memory with Pregnenolone

Known as the master hormone, pregnenolone benefits health and wellbeing in many ways. Vital to building all hormones and particularly testosterone, estrogen and dhea, pregnenolone is particularly useful as a route to natural hormone replacement therapy.

Pregnenolone side effects are minimal but before taking a pregnenolone dhea combination -as with all medicines taken together – you should first check with your doctor.

So, for a safe way to reduce anxiety and improve cognitive ability, look no further than pregnenolone.

The building block of hormones

Description: Pregnenolone is the master hormone, from which all other hormones are made. Regular use has been shown to improve stress and anxiety and reduce inflammation, particularly for arthritis.